Skip to content
2006 Richmond, Virginia Murder Spree
Ricky Gray now be a dead fucking nigger!!!!! Celebrate this waste is off the earth.
httpnews.com/storyline/lethal-injection/virginia-executes-ricky-gray-virginia-family-murders-n708306s://www.nbc 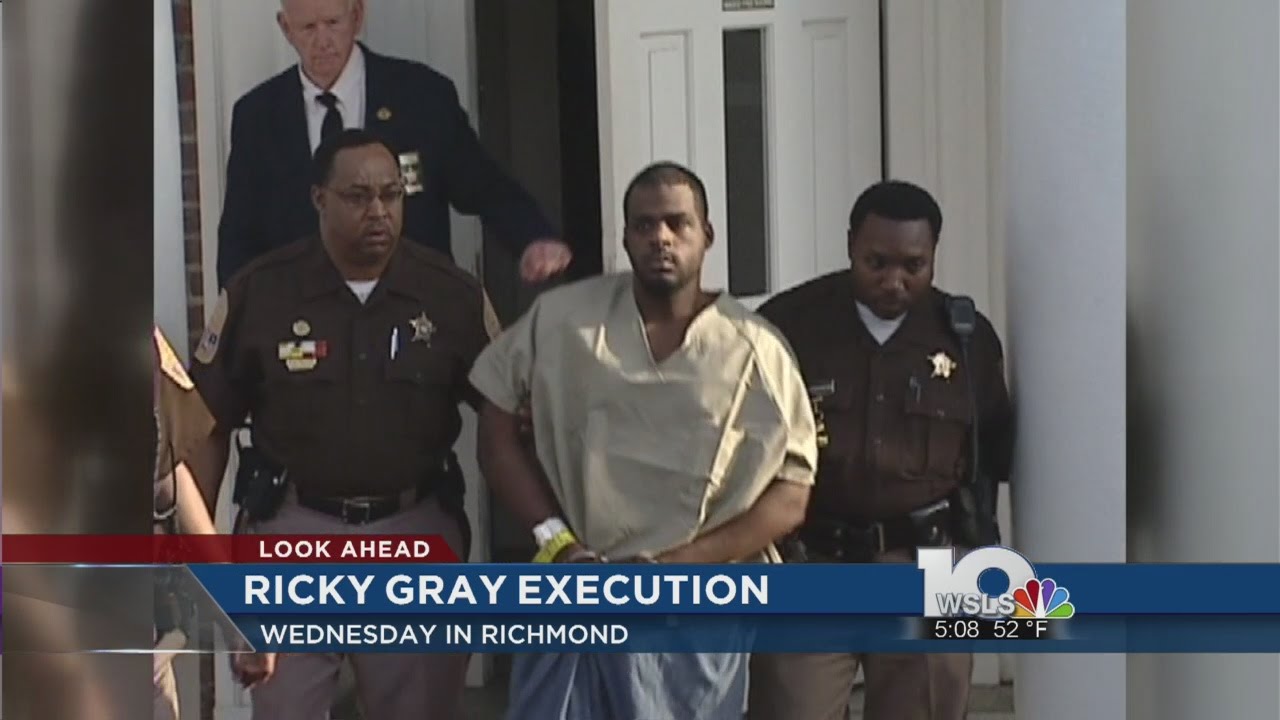 Virginia authorities said 39-year-old inmate Ricky Gray was pronounced dead at 9:42 p.m. following a lethal injection at the Greensville Correctional Center in Jarratt. Asked if he had any final words before the death sentence was carried out, Gray responded, “Nope.”Gray was sentenced to death in 2006 for the murders of 9-year-old Stella Harvey and 4-year-old sister Ruby, and to life in prison for the slayings of their parents, Bryan and Kathryn Harvey.

No fucking remorse typical nigger. He probably hates whites. Imagine if he had no white people around he would still live in a hut made of cow shit. Niggers are so fucking stupid. In January of 2006 2 men Ray Joseph Dandridge and Ricky Javon Gray went on a murderous rampage killing 7 people. They are also linked to 2 other murders that occurred in late 2005 which brings their kill count to 9. 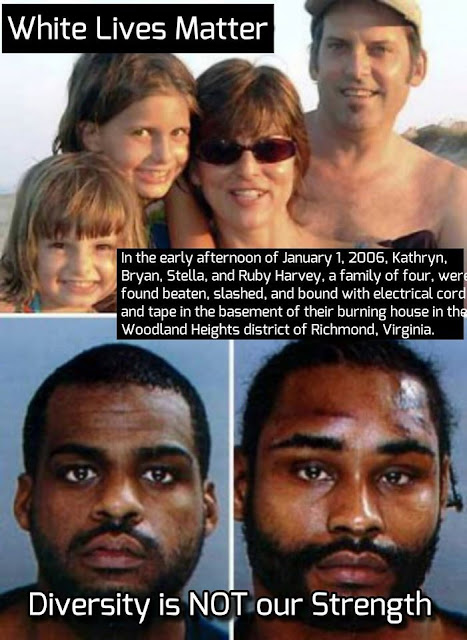 The Harvey Family Murders
On January 1st 2006 Dandridge and Gray along with a female accomplice 21 year old Ashley Baskerville were looking for a house to rob. They found the home of Bryan 49 and Kathryn 39 Harvey. Bryan was a well known local musician and Kathryn owned a local toy shop. They were at home with their 2 children daughters Stella 9 and Ruby 4. 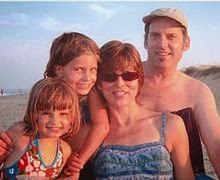 When the police arrived at the Harvey’s home which at this time was on fire the fire department put the fire out.  They found 4 dead bodies in the basement which were those of Bryan, Kathryn, Stella, and Ruby. It was determined that Bryan and Kathryn died of blunt force trauma to the head. Bryan was hit over the head with a hammer a total of 6 times and his neck was cut in a sawing like motion. Kathryn was stabbed and also had saw like motions to her neck. Stella 9 died of smoke inhalation and blunt force trauma to the head. Stella was also stabbed in the neck but was alive when the fire started. Ruby 4 died of stab wounds one which punctured her lung she was also stabbed in the throat. While Dandridge and Grey were inside robbing and killing the Harvey’s Ashley Baskerville was waiting outside as a look out.
Stella the oldest daughter was not actually in the home when Dandridge and Gray first entered the home through the front unlocked door. She was at a friends house at a slumber party. There was a knock on the door and a family friend dropped off Stella. Gray allowed Kathryn to answer the door but told her if she said anything he would kill her family.

Home Invasion: 2 days later on January 3rd, 2006 at 7pm Dandridge, Gray, and Baskerville entered an elderly couples home owned by the Gollsbys in Chesterfield, Virginia. They entered the house by pretending to ask for directions. Once inside they stole several items including a computer, television, DVD player, and $800 in cash. They never harmed the couple physically.

cleaners. It is unknown if Ashley was forced into the house or thought of killing and robbing her mother and step father. Although Dandridge and Gray did say in confessions that she was willingly pretending to be bound to pretend like she was a victim also. She thought they would let her live. Then Gray said he got tired of her and decided to kill her and steal her parents car. Either way all 3 were ended up dead. Purcyell and Mary were found with their throats slashed and had plastic bags duct taped around their heads. Ashley was found with a plastic bag duct taped around her head.
Percyell and Ashley were also found with socks stuffed into their mouths.
Ashley was also the one who provided Dandridge and Gray with a key so they could enter her parents residence.

Captures: One day after the Baskerville-Tucker murders on January 7th, 2006. Dandridge and Gray were arrested in Philadelphia. They were arrested at Dandridges fathers house.
Right after being arrested Dandridge confessed to the Baskerville-Tucker murders. Then 12 hours later Gray asked to talk to a detective and provided him with a 3 page long confession on how he killed the Harvey’s with a knife and a claw hammer. He then admitted to a 2005 murder of his wife Treva who was killed while Dandridge held her down.

Ashley Baskerville (Born August 18th, 1984): Ashley Baskerville was 21 at the time of her murder and the murders committed. She acted as a look out for the Haves murder. She was also identified by the homeowners as being in the house during the home invasion in Chesterfield, Virginia. At the time of her death she was also wearing Bryan Harvey’s wedding band. It is believed that she was romantically involved with both Dandridge and Gray.
Ashley had a history of drug abuse and was also just released from jail. She was known to be very disrespectful and referred to many as a loud mouth. She had a very bad relationship with her step father Percyell Tucker. 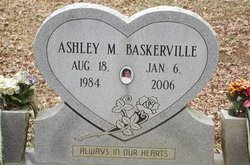 Ricky Javon Gray (Born March 9th, 1977): Ricky Javon Gray was 28 years old at the time of the murders. Gray is Dandridges uncle. Gray was known to go by the street name Cooley. Gray was also charged with robbery in 1996, distribution of crack cocaine in 2000, and possession of crack cocaine in 2002.
Ricky Gray is currently on death row at Sussex State Prison. There is actually a scumbag lawyer is is trying to get this piece of shit waste of skin spared the death penalty. He should be lethally injected too. His lawyer must be just as cold and heartless as Gray. Because Gray keeps trying to fight this death penalty. was found by a passerbyer in a shallow grave in Washington, Pennsylvania. Dandridge held Treva down while Gray beat her with a pipe. She was married to Gray whom she knew was a former convict and lived in a home that her family owned with her husband Gray and Dandridge.
Police questioned Gray and Dandridge about Trevas death but did not consider them suspects at the time. Trevas parents said that the police did a horrible job with investigating their daughters death even going as far as to say that she died of a drug overdose. A homicide investigation was not even launched into Trevas death until Gray’s confession.
Then a little more than a month later Sheryl Warner a 37 year old legal secretary and mother of 3 was found dead. She was found shot and hanging by an electrical cord while her house was on fire in the town of Reva, Virginia. She was on the phone with her father and left telling him that there was a motorist outside having car problems.
Then the day before the Harvey’s murder on new years eve 2005. Ryan Carey 26 was attacked by Dandridge and Gray. The beating occurred in front of his parents house and he was beaten and stabbed in the chest and neck. He spent 2 weeks in a coma. He also lost the use of his right arm. Their motive appeared to be robbery.

Here is a preview to a movie about the crimes. 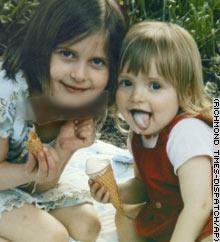 Related Articles on This Excellent Blog