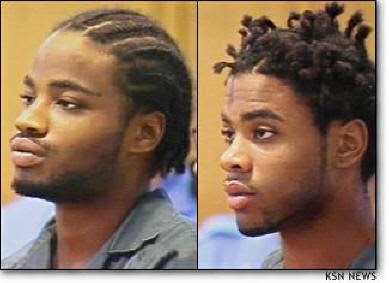 Savage, ugly, worthless, pieces of fucking shit. Again another pointless worthless crime committed by 2 brothers which was so violently disgusting it makes me sick. It also bothers me that this got little to no media attention when it happened. Now I am not PC but if these were 2 white men who did this to 6 black people all hell would break loose in the media. But it wasn’t the case here it was 2 black men who for the hell of it decided to go out and kill 5 white people and seriously injure another (which their intent was to kill her).
The picture you see there of those 2 goofs there is that of the Carr brothers. Reginald 22 and Jonathan 20 both had very hefty criminal records already. These crimes were committed in December of 2000.
Crime Spree: The crimes spree started on December 8th, 2000 when they arrived in Wichita they committed armed robbery against a baseball coach. Andrew Schreiber 23 was an assistant baseball coach at Newman University in Wichita. He was at a convenience store when the brothers brandished a gun and took him in his car and made him withdraw $800 from atms. Just 3 days later
they shot and mortally wounded a librarian Ann Walenta 55 she died in the hospital 3 days later. Her and her husband had just recently moved to their neighbourhood to avoid crime. When Ann parked her SUV in the drive way a black man approached her and told her he needed help. Then pulled out a gun and in cold blood just shot her and left.It was like a gun game to them. But that was just the beginning of it.
On the night of December 14th, 2000 they invaded a home where 5 people where enjoying the night. The people at the home Brad Heyka, Heather Muller, Aaron Sander, Jason Befort, and the lone survivor only known as HG. After they all had dinner and went to bed. One of the men that lived at the home Jason Befort who was in his bed with a woman HG* noticed the porch light came on. He got up to go turn it off.
Then all of a sudden two armed black males entered the bedroom. While one stayed in there the other rounded up all the others in the house. The intruders demanded that they all take their clothes off. Then they asked them all if they had any money? They then forced them to have sex with one another.
Befort was the first one they allowed to get dressed and as one of the brothers drove him to an atm the other stayed and guarded the other 4. Then the one brother raped HG. Then took her to an atm to withdraw cash. After that Heyka and Sander were also taken to atms the only one who wasn’t was Muller.
Then the 5 were driven to a soccer field in the snow. Then were ordered to kneel down in the field.
They were all shot execution style it the head. HG being the only survivor. While they were in the 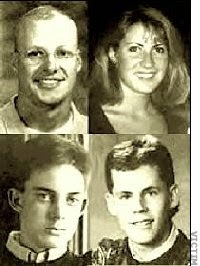 snow the 2 brothers went back to the house and stole more items and even killed HG’s dog. HG was able to make it to a close house and call 911.
The next morning Befort’s truck was featured on the news as the shit stained brothers stole it and left it outside of an apartment building they were at. A neighbour seen it there and phoned the police. Then another man that lived on the building told police that he helped a man move a large screen tv into an apartment. That led them right to Reginald Carr who was living with his white girlfriend.
The other waste of skin Jonathan was also at his girlfriends house mooching of the mother. When the mother realised he had committed the crime she left to the neighbours to call 911. When Jonathan knew the cops were coming he started to run even losing a shoe in the process. The cops eventually caught him. Ann Walenta was still alive at the hospital at this time. She pointed at Reginald Carr as the man that shot her.
Sentencing:  The brothers were sentenced to death in 2002. Worst thing about this is although still on death row, Kansas may overturn the death penalty which means I will have to wait longer to piss and shit all over their graves. As of July 25th, 2014 their death sentence has been over turned and it makes me fucking sick.http://www.kansas.com/news/special-reports/carr-brothers/article1150672.html
Tidbits

This is utter bullshit. These sub humans got their sentences commuted to live. 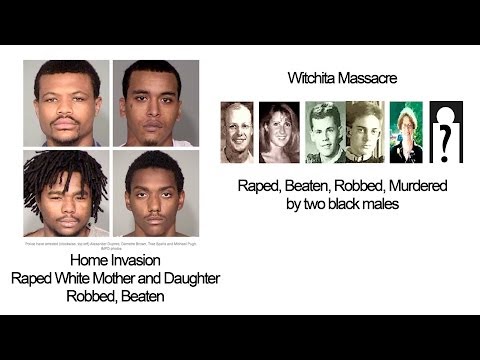