Skip to content
I bet this low life manly looking bitch is proud of the terrorizing shitlit she crapped out of her. I bet Nikko’s father was some random nigger buck whose name she doesn’t even know. It was probably jamal, 1, 2, ,3, 4, 5 Tyrom 1, 2, 3, 4, 5, 6 Buckwheat, his brother, Uncle Ben and Stevie wonder and Ray Charles tag teamed her. Since they are blind I assuming they pretended she was hot. Oh yeah they are niggers before being blind so they  fuck anything. 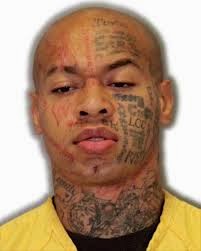 I have profiled a lot of pieces of shit on here (excuse the language here but it is hard with this guy). Before it was really hard to decide which fucking scumbag on here that I blogged about I wanted to see die first or worse. This guy is right up there with child molesters in my book and isn`t just because he is the ugliest piece of shit I have ever seen in my life either. Nikko was shit out onto this earth on September 16th, 1986.
Nikko or ink face or what ever went on a spree kill in Omaha, Nebraska in 2013. He thinks he is a straight up gangster. Now I never heard about this loser until recently. Which I am amazed this wasn`t international news. I actually had a friend from Omaha inform me about him and I googled him and after laughing at what he looked like for a long time I read about his crimes WOW.
He claims to commit his crimes because he is under the influence of some ancient serpent god Àpophis. Sort of reminds me a little bit about that Jeremy Steinke who thought he was a 300 year old were wolf. I think the 2 would make great cell mates. I am pretty sure Steinke would be Nikkos bitch though and be the receiver and Nikko would be the passer.
His murder spree occurred within a month after he served a 10 year prison term for armed robbery and assault. But that 10 year prison term wasn’t Nikko’s only stint behind bars. He has been in and out since the age of 7. Yes 7 that is not a typo. He brought a loaded calibre .22 hand gun to school. Some parents or as you can tell by looking at him parent. We will get into his piece of shits mother in a bit here but now back to Nikko’s prison time.
When he was 11 he got kicked out of a group home for repetitive violence. He dropped out of school at 11 also. Then when he was 12 he committed multiple assaults and even one with a knife. He spent a bit of time in a youth detention centre for those. That never taught him anything he got his first taste of real prison in 2003 shortly after being released from the youth detention centre for 2 armed car jackings.
While he was in jail he was charged twice once for starting a riot. Then he was even disrespectful enough to assault a prison guard who took him to his grandmothers funeral. He was released from prison in 2013.

The Murders: Less than 2 weeks after Ink face was released from prison he shot dead Juan Uribe-Pena 26 and Jorge C. Cajiga-Ruiz 29. They were discovered with their pockets turned inside out in a pick up truck parked near an Omaha swimming pool. The two victims were lured out to the area with promises of receiving sex acts from 2 of Ink Face’s female relatives.Which were later found out to be his sister Erica Jenkins and a female friend named Christine Bordeaux. Ink face then shot both victims in the head then robbed them of their cash. pictured on the right is Cajiga-Ruiz who was 29. 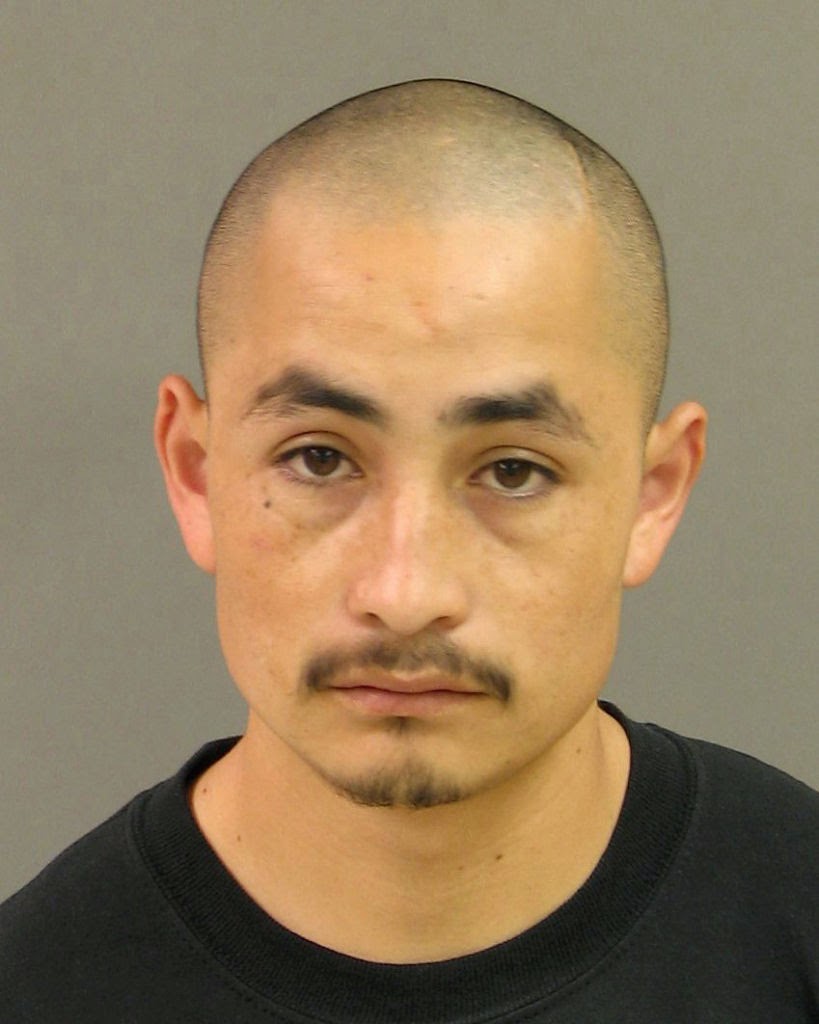 But the rampage does not end there, after in cold blood this animal killed 2 people he decided to do it again.

Then a little over a week later Curtis Bradford 22 was found shot dead outside a garage after getting done working the night shift at a store. It was also found out that that same day Ink face and Bradford posed for a facebook photo together. Bradford was referred to Jenkins as “His Little Homie“. He was also a prison acquaintance. Jenkins committed this crime with his sister Erica Jenkins. His sister shot Bradford first and then Ink face finished him off claiming his sister didn’t do it right. Below is a photo of Ink face with his so called homie Bradford.

Then 3 days later Andrea Kruger 33 (a mother of 3) was found shot dead lying on the road after her night bartending shift. She was driving home to tend to one of her sick children. Her SUV had been stolen by Ink face and 3 of his relatives. One of which is Ink face’s uncle Warren J Levering 51 the other 2 being Erica Jenkins and Christine Bordeaux. Apparently they were looking for an SUV to steal to go out and rob people to get money to attend a lil Wayne concert. Ink face shot her 3 times after dragging her out of the drivers seat while the others blocked her when they ambushed her at a stop sign. She was shot in the head, neck, and back. Then while they left her on the road for dead Ink face’s uncle Levering ate the McDonald’s that Kruger bought for her son on the way home from work. In a phone conversation between Ink face and his sister his sister was mad at him for not throwing Krugers body in a ditch.
At the trial it seemed that Ink face felt bad about killing Kruger saying that he only killed women if Apophis commanded him to. He also stated he had committed many carjackings prior without killing anyone.

The Arrest: He was arrested on unrelated terrorist threat charges on August 30th, 2013. But the cops were already on to him as they caught a female accomplice of his purchasing the bullets used to commit the murders.

The Trial: Ink face pleaded guilty to all 4 counts of the killings. He also said in a letter which he wrote to the Omaha World Herald that he would protect Apophis Kingdom with animalistic savage brutality.
On February 19th, 2014 Ink face filed a law suit for 24.5 million against the state of Nebraska for wrongfully releasing him. He claimed that he was hearing voices from Apophis and they were completely ignored.
He represented himself in court. He pleaded guilty but said that he committed the murders under the act of Apophis. He blamed the prison guards for the murders and that being kept in solitary confinement augmented his schizophrenia. During the trial he was howling and laughing as the prosecutors recalled details of the victims deaths. After all that he then pleaded no contest.
After all that circus of this shit face was done which was known as The Nikko Show. He howled while getting dragged out of the court room.
On April 16th, 2014 he was found guilty of all 4 murders. As of this date he is in a Lincoln, Nebraska psychiatric hospital.
More About This Shit Stain On Society: Apparently on the night Ink face got out of jail his mother threw a get together at a Travel Lodge Motel. Which was attended by the family. Apparently Ink face has a wife Chalonda and a girlfriend Sherry Floyd who is 48 and also has tattoos all over her face. I guess that night Ink face hopped in the shower with Floyd and it almost made Chalonda and Floyd get into a scrap. Apparently Chalonda was threatened by a weapon from Floyd earlier.
Lori Jenkins: Lori Jenkins is Ink faces mother. She was 47 at the time of the murders and was charged with covering up 3 of the 4 murders. She was sentenced to 10 years in federal prison. Of Loris 6 children 4 were arrested in the same month that this shit show went on. 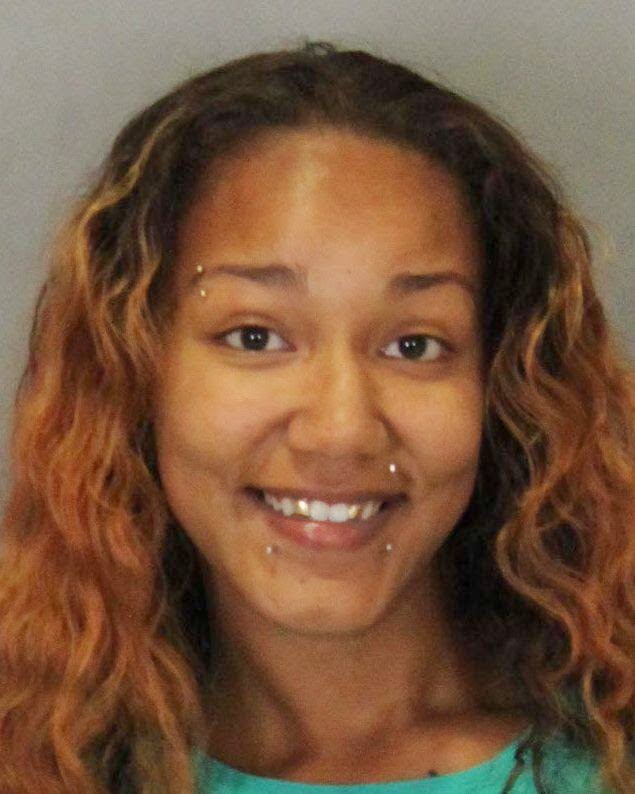 piercings all over her face. That’s her to the left incase you couldn’t figure it out. Just hideous. She was charged with murder in the Bradford slaying. She is also being charged as an accomplice in the others. If you thought that was bad she is also being charged for robbing a gas station earlier in the year and for assaulting inmates when she was in prison earlier in the year. She is also going to be charged with an assault that she committed on an officer while leaving court.
She is almost as loud mouthed as her brother yelling out in court “How can I be a murderer, I am pregnant“. Yes I know it is hard to believe that any sane person even Ink face would have sex with her but she was infact  months pregnant at the time. She also has a 7 year old son in protective custody with the state now. So she is shitting out batches to be just as bad. Arrest or abort those kids now! This family has shown with their blood they are  born failures.
If you thought that was bad and fucked up she actually had the nerve to say in jail that sentencing her brother to death was evil and sinful. She said we are all human beings and no one has a right to take another ones life. This family is fucked.

Sherry Floyd: Sherry Floyd was Ink faces girlfriend that he met while at his grandmothers funeral in 2009. Yes the same one where he attacked a prison guard at. She claims that she visited Ink face in prison she gave him over 30,000 dollars. I imagine from either drug sales, prostitution, or robberies. I figure that because I am guessing welfare checks and food stamps can not stretch that far.

Floyd even tattooed her face to be like Ms Ink face at his request. I couldn’t find any photos of this pig with tattoos on her face. But apparently she has perniciousness on her forehead meaning evil and another tattoo that translates into I will die and kill for you.
Floyd says that because of this case she lives in fear and had to move because of this case.
Charlotte Jenkins: (Nikko’s Wife) It looks like a male buck nigger. 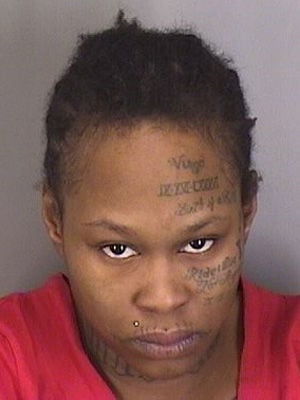 Tidbits:
Conclusions: This family is fucked execute them all. This is out of control and it is great most are in custody. What a family tree to be proud of. I could write for days about these losers they are all over the internet. I feel sorry for the residents of Omaha that had to and still have to worry about some of this waste of skin roaming around on their streets. 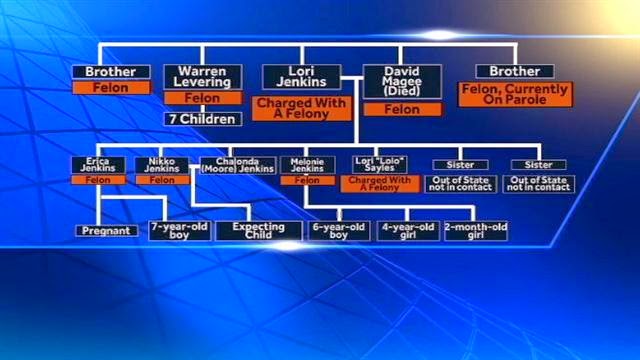 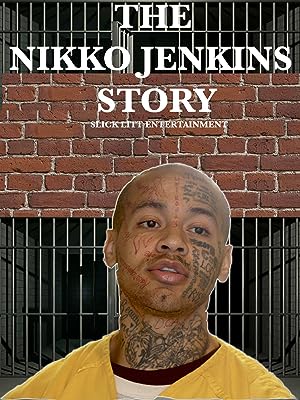 Look at that Judy Huxtable looking negro on the right. That is Nikko’s sister. She looks proud in that mug shot. Sort of like a rookie pro sports player does on their first big league card.
This family with out a doubt is the most fucked up family to ever grace the face of the earth. They aren’t white trash, drnken natives or even niggers. They are the feces of a niggers feces’s feces. They should just be flown up to space in a space ship all of them and let them figure out how to live. I am almost certain none of them have ever had a real job.
Tweet