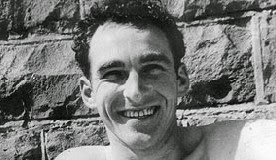 Being away from home for almost the last 2 months working 16 hour days has not given me much time to write on the blog lately. On my way home last night I decided to stop in at the pub and have a quick pint. I got to talking with this guy from Australia and we started talking about TV shows we like Forensic Files, Solved, Wicked Attraction and then John List came up. Now living in Canada even though I am familiar with American crimes and guys who are on the run for killing their families IE Bradford Bishop, William Fisher, and the captured John List. Buddy there asked me if I ever heard of an Australian man by the name of Elmer Crawford. I told him no and he told me to google him and I did. It made me realise how ignorant I have been and focused on mainly stories from the US and Canada. I imagine a lot of ID junkies in Canada and the US have not either. So I decided to scour the net to find out what I can about him. There is a lot and if this piece of shit is still alive he needs to be brought to justice.
The Crime: On July 2nd, 1970 a car with 4 bodies inside was discovered at the bottom of a cliff a at Loch Ard Gorge which is located at Port Campbell, Victoria, Australia. The bodies inside were those of 4 of the 5 members of the Crawford family. Mother Terese (who was pregnant) and the children Kathryn 13, James 8, and Karen 6. It was later determined that they were murdered by their father Elmer. The way of the murder was cruel and sick. Elmer who was not an electrician but had some general knowledge due to his job at a raceway.
It is determined that Elmer had murdered his family in their home by beating them with a hammer and electrocuting his wife with alligator clips. His goal was to make it look like a murder suicide so he could claim insurance money he would receive if his whole family died.  He basically wanted it to look like his wife went nuts and beat the children and drove off the cliff.
Initially it is believed that Elmer Crawford wanted the car to crash into the water so the bodies wouldn’t be found and it would be easier to collect the insurance money. He could of just said his wife ran off at first and then collected the new wills they both wrote up. But when he pushed the family’s FE Holden vehicle off the cliff late at night it didn’t quite make it. instead it was sitting at a ledge overlooking the sea. That put a damper in his plans and instead of cleaning up the evidence and going with his story, he had to bail.
When the police realised the vehicle was registered to Elmer they actually went to his house the next day. The police not knowing the vehicle had bodies inside left after no one answered the door.
Crawford’s Whereabouts and Sightings: In 2010 detectives thought they had located Elmer Crawford. A man who passed away in San Angelo, Texas was found with multiple fake Ids resembled Crawford. But after a DNA test was given it was proved not to be him.
I find this one a little bull shit but you never know. In 1994 a former associate of Crawford’s claimed to have seen him in Perth, Australia. The associate claimed that Crawford did not recognise him and told him that he was there on Vacation from New Zealand. I think it is fake because would this associate not at least put in the effort to find out where he was staying and or where in New Zealand he lived.
My Thoughts: I agree with this one post I read one blogger write the sack of shit is either dead or will never be caught. I look at how List got caught and gives you a glimmer of hope but this is the oldest one out there. I don’t think Bishop will be caught either. I do how ever believe if he is alive Robert Fisher will be caught.
Tidbits
Links
http://en.wikipedia.org/wiki/Crawford_family_murder
http://murderpedia.org/male.C/c/crawford-elmer.htm
http://www.theage.com.au/news/national/where-is-elmer-crawford/2005/06/30/1119724753989.html?from=moreStories
http://www.irishecho.com.au/2010/07/27/irish-woman-holds-key-to-40-year-old-murder-case/4113
http://www.abc.net.au/pm/content/2010/s2952640.htm
Tweet