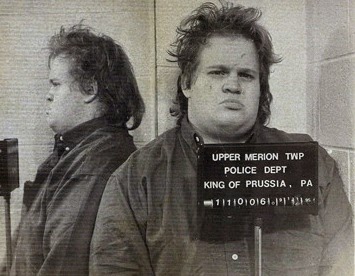 Look at this sad fat fuck. Ladies I am assuming he is also single so don’t line up all at once.  This stud muffin is a child killing, rapist, necrophiliac, and he is also into vampires. He does or for that matter did hold a job though. He was working at a children’s store that his parents owned in Collegeville, Pennsylvania.
This crime always sends chills down my spine as he killed a beautiful young mother and her 19 month old daughter.
On September 10th, 1995 Fairley was working alone at his parents kids clothing store in Collegeville, Pennsylvania. The store was called Your Kidz and Mine. Just before closing time that day a young woman named Lisa Manderach and her 19 month old daughter Devon entered the store. When Fairley realised they were the only customers in the store he locked the door. He then proceeded towards Mrs Manderach and attempted to sexually assault her. He ended up strangling Lisa to death and then strangled baby Devon to death. Then he raped Lisa’s dead corpse on the store floor.
After that he went to some hippie goth loser concert like nothing happened.
Caleb Fairley: Born October 21st, 1973. Caleb Fairley was a loner. You can tell by just looking at him. He was into Vampires and Dungeons and Dragons. He was obsessed with pornography and for who knows what reason had a real difficult time with women. He apparently got turned down alot go figure huh? He lived with his parents and worked part time at a store his parents owned called Your Kidz and Mine. Fairley at one point was close to his younger brother who shot himself when he was four. He was often bullied in school.  He also worked one time at a restaurant where co workers constantly ridiculed him.
In 1998 Fairley’s father James went to jail for filling out false prescriptions at the pharmacy he owned. More Here.
Victims
Lisa Marie Manderach: Born September 30th, 1965. Lisa Manderach was a mother to Devon Manderach and wife to James. She graduated in 1983 at Norristown High School and a volunteer for Meals on Wheels. A memorial playground was built for the two of them in Limerick, Pennsylvania in 1998. She was 3 weeks shy of her 30th birthday the day she was murdered.
Devon Manderach: Born February 4th, 1994 Daughter to James and Lisa Manderach. More Here
Arrest: Lisa told her husband where she was going before she left. When her husband phoned the police to report her missing they found her car outside the store. When police conducted a search of the store they found porno mags in the back with cum stains all over them. Blood was also found. They also found a hair which appeared to be similar to Lisa’s on the floor and in the vacuum cleaner. They also found a large wet puddle which appeared to be drool on the floor.
With further investigation they found peepholes drilled into the dressing room. It assumed Caleb used these to peep on women while changing.
When police searched Caleb’s room at his parents house they found even more porno. You can’t blame him that bad for the porno really remember this was 1995 and the net porn was very very slow back then. They also found a sweatshirt with a vampire attacking a woman that bore a very close resemblance to Lisa Manderach.
When police questioned Fairley about Manderach they noticed he was wearing make up. When detectives told him to wipe it off his face they noticed large scratch marks. He claimed he received it while in a mosh pit at a concert.
When hikers found baby Devon’s body police charged Fairley with murder. Fairley entered a plea bargain with prosecutors to tell them where Lisa’s body was if they did not seek the death penalty.
Request for a New Trial: Even though Fairley was 21 at the time of the murders. He claims that he was mentally competent as a minor at the time. Stating shit that his brain wasn’t fully developed at the time blah, blah, blah. Saying his age should of been considered at the time. Sorry buddy 8 year old children know better than to do what you did.
Sentencing: Fairley was charged with two counts of first degree murder and sentenced to two life sentences.  He is currently incarcerated at a state facility in LaBelle, Pennsylvania.
Thoughts: Even without the death sentence How this fat fuck is still alive and breathing in prison is beyond me. I pray the inmates kill him.
Links
http://en.wikipedia.org/wiki/Caleb_Fairley
https://www.google.ca/url?sa=t&rct=j&q=&esrc=s&source=web&cd=16&ved=0CGcQFjAP&url=http%3A%2F%2Farticles.philly.com%2Fkeyword%2Fcaleb-fairley&ei=mHICVYzZKYOkgwTBpYTgBw&usg=AFQjCNFwgEqZAEgaR1BkEwalgCY0QQ9t1A&sig2=0Y78jw69IBk2Wh16ucXhwQ
http://articles.mcall.com/1995-09-17/news/3044761_1_fleming-cos-king-james-myers
http://www.timesherald.com/article/JR/20121129/NEWS01/121129467
http://bettyboochronicles.blogspot.ca/2009/09/remembering-lisa-and-devon.html