In 1982  hillbilly white trash Alvin and Judith Neeley murdered young girls so Alvin can rape them first and they don’t talk. These 2 are so fucking hardcore red neck they live in motels and do not even have a trailer. They are like the farm team of rednecks. Alvin died in prison Judith who was the youngest person in Alabama ever sentenced to death row had it commuted to life. She is still sitting there to this day. I wrote about them HERE.

Mooresville, Missouri- This is the story about Ray and Faye Copeland. Ray hired 5 hobos to work on his farm and buy cattle and then murder them after he was done with them. Some say his wife Faye must of not known about the murders. I find it hard to believe but not impossible.
After found guilty they were the oldest couple in the US on death row. Ray 76 and Faye 69. Ray died of natural causes in prison in 1993. In 1999 Faye’s sentence was commuted to life in a nursing home. She died in 2003.
https://en.wikipedia.org/wiki/Ray_and_Faye_Copeland

Nigger spree killers Alton Coleman and Debra Brown go on a killing spree in Wisconsin, Illinois, Indiana, and Ohio which left 8 people dead. They started out by murdering a 9 year old child in Wisconsin. Coleman was executed and sent to the big watermelon in the sky on April 26th, 2002. There is a blog post about them HERE.

Episode 13- Death on the Sunset Strip

Woof what a fucking pig Carol Bundy. She is almost blind. I am assuming the guys that date her must be too. Carol and a guy named Doug Clark went and murdered prostitutes in Los Angeles. When Bundy was 17 years old she married a 56 year old man. Guy is already blind. I wonder if that would be called a gay wedding Carol looks very manly. Her and Douglas went as far as to molest a 11 year old girl. She died in 2003 at the age of 61 due to heart failure. Good fucking riddance. Probably took too many steroids or hormone pills. 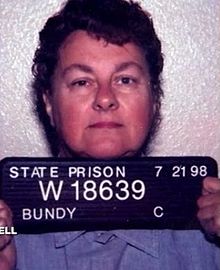 Carol also lived in a home for battered women after her second husband kicked her ass. Who the fuck was her husband the Incredible Hulk?