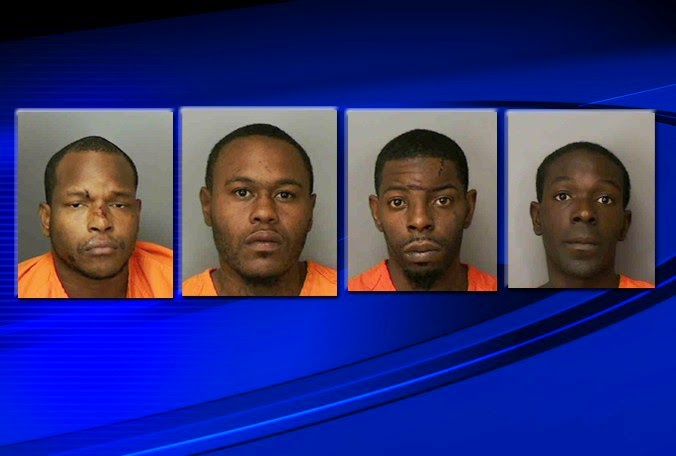 Four sub-human creatures went on a racist hate crime spree in Polk County, Florida beginning January 15th, 2015. They robbed a pawn shop, had a shoot out with police and then ended up killing 2 white women.
When the culprits left the home of the 2 women in a stolen GMC Jimmy an officer attempted to pull it over. Then the monkeys started firing their guns at the officer. The officer was not harmed as it assumed the culprits were pointing their guns sideways and could not hit targets.
The vehicle eventually got stuck in the sand (probably from the driver fiddling with the station looking for cRap songs). All the culprits fled but a canine dog caught up to Devonere McCune and police nabbed him.
Then a resident phoned in about strange disturbances coming from his neighbours house. When officers went to investigate it. A blue car came barrelling out of the garage straight at the officers. A gun fight ensued and the idiots got the car stuck again. Two of them fled leaving their homeboy Michael Gordon stuck in the car by himself. He was arrested. Gordon got a cap busted in his ass but sadly it was not life threatening. After Gordon’s arrest they found the bodies of Moran and Royal in their home.
The next morning they found Lamb and Williams. Williams was on the downlow under a tarp in a shed nearby. Lamb was caught jiving in someones back yard.
Michael Gordon: 34 Charged with 2 counts of first degree murder. Also charged with armed robbery. When The vehicle they were in got stuck all of Gordon’s homeboys bailed in hoodies and left Gordon hanging. He was the only G left in the vehicle.
Devonere McCune: 22 The first to get busted by the cops.
Javon Lamb: 25 is facing 2 counts of armed robbery, 3 counts of attempted murder on a police officer, and numerous parole violations.
Terell Williams: 29 is facing 2 counts of armed robbery and one count of attempted murder on a police officer.
Victims Mother and daughter.
Patricia Moran 72
Deborah Royal: 51
None of the suspects got bail. They are due back in court February 17th, 2015.
This should be a hate crime. If these were white guys killing 2 black women it would be all over the news. Sickens me I hope they all receive the death penalty.
Links
http://www.nydailynews.com/news/crime/fla-police-hunt-2-suspects-2-killed-crime-spree-article-1.2080704
http://www.wtsp.com/story/news/2015/01/15/polk-swat-situation-haines-city/21832809/
http://www.baynews9.com/content/news/baynews9/news/article.html/content/news/articles/bn9/2015/1/16/manhunt_continues_fo.html