Skip to content
Lauria Bible and Ashley Freeman
This case has been solved. 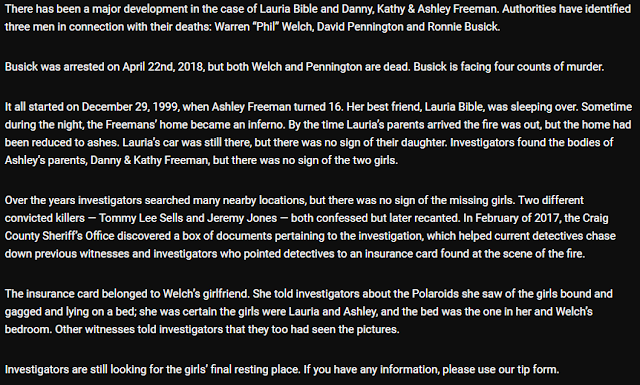 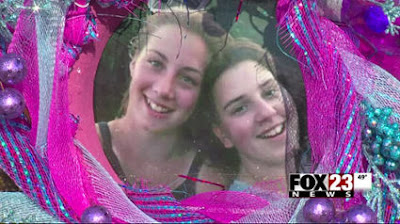 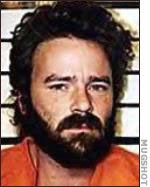 Weird pieces to the puzzle: Lorene Bible talked to the coroner and was told “The county coroner told me that there was only one body, is all they found.  I said, ‘Have they found anybody else?’ And she said no. They’ve looked, but there’s no other bodies there.”
Now I am no coroner but I am pretty sure these guys are quite professional usually and do not mess things like this up. That right there looks like a massive cover up.
Danny’s brother Dwayne also said the sheriffs department was threatening him and said “He was basically told, according to Danny, that they could do anything they wanted to him and his family, and there wasn’t a thing he could do about it.”
A woman named DeAnna Dorsey who was a nurse that assisted in the hospital during the Freeman’s son Shane’s death, appeared on a show What Really Happened. Which was a show profiling what happened at the Freeman’s home that night. Her daughter was a friend of Ashley’s. She was shot and killed in the hospital shortly after the taping of the show (which never did air). The authorities said that a schizophrenic named Ricky Martin shot and killed her because he was mad about the hospital downsizing. Martin was killed shortly after by police. Martin had never met Dorsey and some speculate that it had to do with the Freeman’s death but that has yet to be proven.
11 years after the murders the police released information about 2 suspicious vehicles seen in the area around the time of the fire. How can anyone remember something like that that happened so long ago. Sounds suspicious.
Additional notes:
Final thoughts: There is no question that the Freeman family was very dysfunctional and weird. Especially the father and the son. I personally believe that this case will never be solved nor will the girls bodies ever be found. It is so hard to tell who could of done this. The police look very guilty but by the sounds of it Danny and Shane probably had many enemies.
I am also a little shocked that the Bible family would allow their daughter to visit a home that was so messed up like that. Regardless if they were best friends or not. I do not know if the Bible’s knew about the issues that that Danny Freeman had, but they surely must of been upset that their daughters best friends brother had broken into their home.
But again I think this is one that will never be solved.
Some References:
http://kfor.com/2017/12/31/state-authorities-announce-new-leads-in-search-of-oklahoma-girls-missing-since-1999/
http://kfor.com/2016/01/25/new-leads-in-search-of-oklahoma-girls-missing-since-1999/
http://unsolvedmysteries.wikia.com/wiki/Lauria_Bible_and_Ashley_Freeman
http://unsolved.com/archives/kathy-danny-freeman
http://grandlakenews.com/miami/news/article_abd82e37-8b44-5713-a9f5-cad359628a2e.html
http://www.charleyproject.org/cases/b/bible_lauria.html
http://amwfans.com/thread/611/ashley-freeman-lauria-bible-oklahoma
http://www.missingpersonsofamerica.com/2013/01/ashley-freeman-and-lauria-bible-two.html
http://charleyross.wordpress.com/2010/11/04/new-details-released-in-ashley-freemanlauria-bible-investigation/